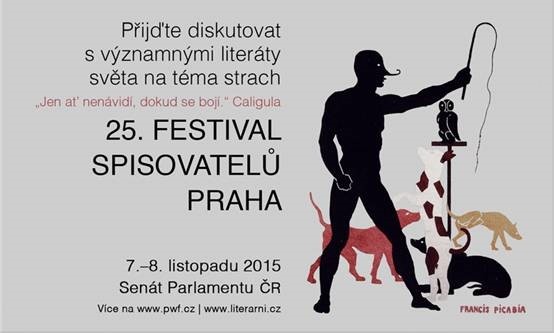 The 25th Prague Writers’ Festival, which brings together prominent writers and thinkers from around the world, will address a particularly hot topic this year – fear : fear to know oneself, fear of occupation, fear of change. On the eve of the festival (November 6-9) Miroslav Krupička spoke to its president Michael March about the main theme and this year’s participants.

“Fear is ever-present. It is everywhere. It starts with birth, the fear of being born, finding the first nipple, but the question of fear for the festival is man-made fear, not natural fear. Natural fear we can feel, we know, we can touch, we can avoid, but man-made fear, manipulative fear which is occurring in our society we have to look at in an abstract way and deal with it in a very proper manner. So the writers who are coming are coming from conflicting countries, antagonistic countries –Iran, Iraq, Israel, the United States…and they have all experienced fear and also war, because the topic of this year’s festival is both fear and war. And these writers are exceptional, their personal experience their words are bringing something very new, almost unique to Prague.”

Could you name a few?

“Well, we have Mahmoud Dowlatabadi, an extraordinary writer from Iran. He lives in Teheran, he was in prison. He was put in prison by the secret police because they discovered that everyone was reading his novels, so they figured they had to be subversive …and they put him in prison for two years. He has written a book called The Kernel which has not been published in Iran. It is about the revolution, about the many conflicting elements of the revolution, it is a fabulous work and I believe that eventually it will be published. So he will be reading from The Kernel. ”

“We have a writer from Iraq (Samuel Shimon), he is from an Assyrian family, he wanted to go to Hollywood, he never made it. He left Iraq in 1979 and in travelling the world he was tortured, put in prison many things happened to him. He was taken under the wing of Adonis in Paris, he was helped and now he is the publisher of Banipal, the foremost publication of Arab literature in English in the world, coming from London. He has written a book An Iraqi in Paris, an outstanding writer…”

“We have Yishai Sarid from Israel, he was in the intelligence service in Israel, he is a lawyer, his father was for 30 years a member of the Knesset, he has written a detective novel about the secret service, about interrogations in Limassol, an extraordinary novel, so he will be there. And of course, they will speak together about war, about fear, about their societies. The festival lives very much in the present, so that the writers are speaking in immediacy for people here.”

Will there be any Czech participants?

“Of course, we will have two outstanding Czech writers Marek Šindelka and Miroslav Topinka, a poet a novelist and short-story writer. We also have a writer who will be moderating – James Gabbe from New York who was in the Vietnam war. He was a captain, he was there, he experienced the war and he has a great story to tell. And we also have Arnon Grunberg a very, very famous and popular novelist here, coming from the Netherlands. He was embedded with the troops in Afghanistan in Iraq, he knows the situation very well and he has a new novel being published in Czech called Gstaad.”

You are keen to involve the public in the festival. Are the events in the Czech Senate open to the public?

From past experience, do Czechs get involved in the festival?

“Well, the festival is for Czech people and it is created so that it is extremely intimate, so that anyone can speak to the writers. One can have a glass of wine, a cup of coffee with a writer and speak directly. It is not a commercial event. These people are not here to sign their books and leave. They are staying in Prague to speak with people, to see the city, experience the culture of Prague and they are available for everyone. The whole idea of the festival is to bring people’s personal experience here and for that to be shared. Aristotle liked to say –to have courage you need personal experience and knowledge and that is what the festival tries to give, and also to bring a consciousness -a universal consciousness – to Prague.”

It is the 25th Prague Writers Festival, looking back do you think you have achieved your goal to open Prague to the world, as you yourself put it?

“Goals are never achieved, but we have been very, very successful and we have opened Prague to the world I think. It still needs to be opened more fully, that’s an unending process, but I think we have accomplished a few of the things which we set out to do and we are pleased to be around for 25 years. We came to Prague in 1991 as the first independent international festival and we opened the doors of Wallenstein Palace to the public. The doors had been closed since World War II– so that’s an accomplishment.” 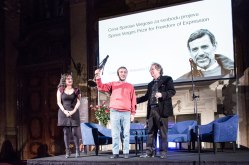